A Greater Way to Approach Infidelity 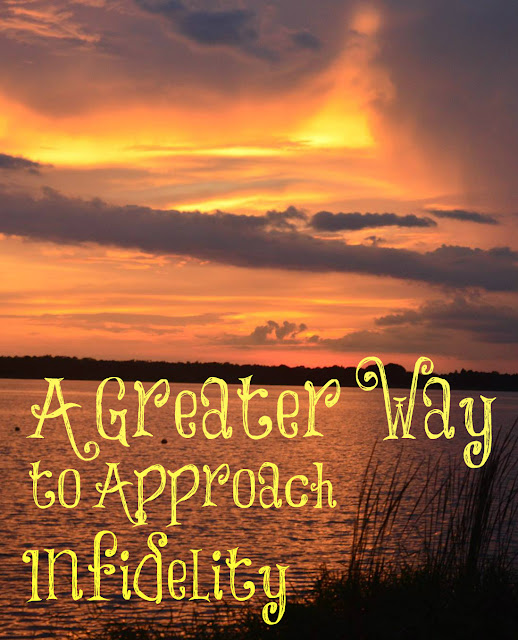 With the tragic news of Joshua’s infidelities at the forefront of so much speculation, I wanted to research what godly men and preachers teach about divorce since I will never encourage anyone to get divorced. I believe the vows through good times and bad times, sickness and health cover about everything that may strike a marriage. Plus, marriages are an example of Christ and His church and He will NEVER divorce His church. Here are some of the words John MacArthur had to say about divorce from a sermon in 1979.

Where you have self-centered, sinful, carnal people who cannot sustain right relationships and where you have a society with toleration for divorce, you're going to have divorce on a rampant, pandemic level and that's what we have in our society.

And that's why when you come to Malachi 2:16 as we did in our last study you hear God say, I hate divorce; I HATE divorce. I don't care for what reason; divorce always violates the imagery God has designed for marriage, as well as violating the marriage itself…I hate to think of the next generation of emotionally imbalanced people. I hate to think of all of these little children in broken homes that are going to grow up and no sense of security, no concept of authority, no sense of morality, no standards to live by, etc. I hate to think of the societal effects of divorce. But that's down the line for me; what I really hate to think of is the fact that divorce and remarriage is a violation in many cases of the Word of God and that's even a more important issue to me.

Now, the Old Testament lays down a standard and it never changes. Let me add this, divorce, now get this, divorce is NEVER God's way to resolve a conflict, never. That's why God never com­mands divorce and God never really condones divorce in the Bible. God knows it'll happen, and God tries to regulate its consequences, but He never commands it because it's never the solution.

God's design was no divorce; God prohibited divorce; God hated divorce. However, God knew in a cursed world where sin existed and relationships were strained because of the curse itself that divorce would be a reality and so God simply permitted that when divorce happened there had to be certain things followed to insure what would come about as a result. {He is speaking about these verses from Matthew 5; "It hath been said, Whosoever shall put away his wife, {or divorce his wife} let him give her a writing of divorcement; But I say unto you that whosoever shall put away his wife, except for the cause of fornication, causes her to commit adultery; and whosoever shall marry her that is divorced committeth adultery."}

God was trying to regulate the consequence of divorce. Nowhere will you ever find on any page of the Bible God condoning or commanding divorce. It never has a divine sanction; it’s just that God knows it exists, and Jesus recognizes that it exists. It was basically a sociopolitical feature to give a writing of divorcement to regulate the inevitable results.  There had to be some legal process because marriage was a legal contract, and so when people were shedding their wives and men were becoming adulterous or women becoming adulterous, when the innocent party was turned loose, they could make no claim for anything; no one would know what the circumstances were. They would not be able to explain their situation. And so to ease that and to regulate future behavior, there was a writing of divorcement.

Let me summarize; listen, what have we learned so far? God made man; God made woman to marry and be permanently one. God wanted an absolute commitment of body and soul for life. God hates divorce; not some of it, all of it. It is never His will, but He recognizes that it will be a part of human society because of sin. In certain cases God will allow divorce as a technicality in a case of adultery only, but it is not necessary because a greater way to approach it would be to love as Christ loves the church and as God loved Israel and as Hosea loved Gomer. The scribes and the Pharisees had perverted this absolute divine standard, and Jesus clarified it, and in so doing pointed to them as sinners; for they had defiled and lowered God's standard.

If no one knew who Anna and Josh were they wouldn't have to answer to anybody while they sought God. I have tried hard to live by the standard of lifting my husband up at the City Gate which means I do not tell others the ways my husband fails me. So I have had the luxury of standing by my husband without the ridicule of others who think I am a fool. God wants to redeem Josh, not condemn him! He is getting plenty of condemning. I have a feeling Anna doesn't want to condemn him either. She just wants the husband and marriage that God had planned for her. I have looked at my husband and enjoyed seeing the work God has done in his life, even though his sin has hurt me and hurt me badly. He is God's child and deserves to be redeemed and built up by God to be the man He wants him to be.

I would hope that my husband would stand by me if I was sinning in our marriage. Okay, who are we kidding? Of course, I sin in our marriage. Do I do all my husband needs of me as his wife all the time? Nope! In fact, his pain in my not fulfilling his needs probably matches mine when he has gone outside our marriage to have those needs met. Sure, my husband has had choices. But so do I! Who am I to throw the first stone? If Anna wants to stand by Josh and be with him during this time {perhaps a long time} of becoming the man God wants him to be, then good for her. Let her be. I will be praying for her strength and devotion to her husband and God and that the scoffers are silenced.

Anna, along with all the women out there who have disobedient husbands, there are a “cloud of witnesses” of women who have walked in your shoes yet stayed committed to their wayward husbands and many have won them without a word. Stay strong, precious ones, and cling to your faith and the Lover of your soul.

Wherefore seeing we also are compassed about with so great a cloud of witnesses, let us lay aside every weight, and the sin which doth so easily beset us, and let us run with patience the race that is set before us, Looking unto Jesus the author and finisher of our faith; who for the joy that was set before him endured the cross, despising the shame, and is set down at the right hand of the throne of God.
Hebrews 12:1, 2