The Exception Clause and Permanence of Marriage 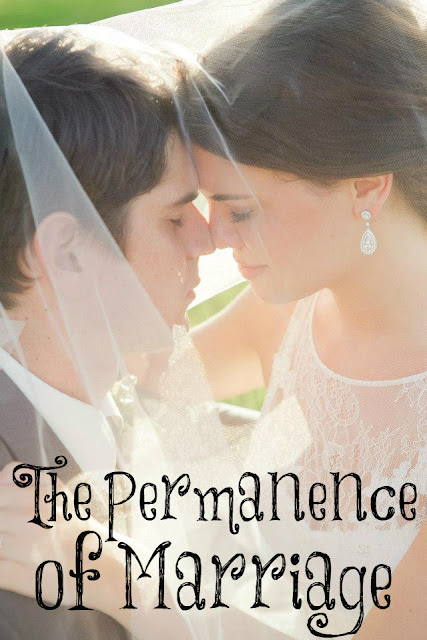 This was a difficult post for me to write. I'm still not certain that what I write here is biblically sounds but I am always searching for Truth. Sharing Truth is MUCH more important to me than sharing my opinions. I am a Truth-seeker. I don't want to give my opinions in areas of eternal significance. I want to examine Scriptures carefully to see what God's Word teaches concerning godliness, not mine. Here is what John Piper had to say about opinions verses speaking Truth:

Don’t just spread opinions, but yes, do give careful, well-reasoned, biblically saturated, well informed, compassionate, Christ-exalting, humble convictions about the issues of our day. There is not enough of that. There is plenty of opinion, but there is not enough of that. Then let the chips fall where they will. If you get criticized, you get criticized. If we stop speaking because we are afraid of criticism of stirring up people’s slandering us, we will never communicate in any public forum. Don’t be intimidated by negative feedback.
Don’t stop speaking and living the truth. Do stop the buckshot of opinion scattering, but don’t stop the well-aimed rifle bullet of truth at the stronghold of error.

The exception clause that Jesus gave about divorce "except it be for fornication" baffles me. The verses in Mark 10:2-12 concerning the same words of Jesus on this issue don't give the exception clause. Luke 16:18 doesn't either. In fact, in Matthew, when asked by the Pharisees if a man can put away his wife, Jesus plainly answered that from the beginning He made them male and female; a man shall leave his parents and cleave to his wife becoming one flesh, thus rejecting Deuteronomy 24:1 which the Pharisees had brought up. He ended by saying that whatever God has joined together, let NO man put asunder. Paul, along with the other New Covenant writers, never gives adultery or any other reason as an excuse for divorce.

And unto the married I command, yet not I but the Lord, Let not the
wife depart from her husband: But and if she depart, let her remain unmarried, or be reconciled to her husband: and let not the husband put away his wife. He goes on to write, But if the unbelieving depart, let him depart. A brother or a sister is not under bondage in such cases: but God hath called us to peace.

There's still no word about divorce here and he could have easily used it since he has used the word before but always in connection with sin. A believing spouse must let an unbelieving spouse leave if they want, but they don't pursue divorce or remarriage, since they are vow keepers regardless of what their spouse does.

Since I continue to seek Truth in this area, I listened to Voddie Buacham's sermon on "The Permanence of Marriage." He teaches that the Bible doesn't give any reason for divorce or remarriage. Some will argue that the innocent spouse whose wife or husband divorced them should be able to remarry. However, if the spouse who leaves and divorces the spouse who stays, I'm NOT convinced that the abandoned spouse can't remarry. For those who have been divorced and remarried, Pastor Baucham makes it very clear that they should confess their sin, but then commit to the permanence of the marriage they are presently in. This is the kind of God we serve! He forgives ALL sin.

Did you notice that in the exception clause, Jesus used the word fornication in this verse instead of adultery? {KJV version} The definition of fornication is "sexual intercourse between two unmarried persons." If Jesus was talking about married people here, it seems He would have used the word "adultery" {voluntary sexual intercourse between a married person and a person who is not his or her spouse} since He used it in other parts of Scripture. Whosoever puts away his wife, and marries another, commits adultery: and whosoever marries her that is put away from her husband commits adultery. {Luke 16:18}. He used the word "adultery" in this verse from Luke but NOT in the exception clause. Why would He use the word "fornication" in the exception clause? Matthew was written mainly to the Jewish people who were still living under the Law. This is why the book of Matthew is filled with Messianic prophesy.

Remember when Joseph and Mary were betrothed and she was found pregnant. This is what was written about this situation since Joseph thought she had committed fornication; then Joseph her husband, being a just man, and not willing to make her a public example, was minded to put her away privily {Matthew 1:19}. "Put her away" means "divorce." They weren't even married yet; how could this be?

During the betrothal period, before the marriage ceremony and consummation, if a soon-to-be wife is found to be "unclean," the man is allowed to divorce her. Perhaps Jesus is giving the exception clause for those who find that their wives have fornicated before the actual ceremony. I believe He would have used the word "adultery" if He meant they had already gone through the marriage ceremony, consummated their marriage and became one flesh. Besides all this, this exception clause is in only ONE book in the entire New Testament, yet many give it too much weight. We must always take the Bible as a whole; not give one little phrase much weight weight but measure it against the entire New Covenant which was written for us and teaches us to forgive and love one another. Nowhere else in the other Gospels or books of the New Covenant is divorce allowed.

Voddie Baucham gives many examples of marriages that are NOT biblical reasons for divorce: imprisonment, alcoholism, drug addiction, adultery, gambling, etc. He admits this is hard teaching, but Truth is hard. It's a narrow road we walk on. His church does, however, help protect women and children who may be in harm due to a disobedient husband; as all churches should do and even call the authorities when needed. {If a woman ever came to me who was married to a truly evil man like a murderer or a child molester, it would be VERY difficult for me not to recommend her getting a divorce.}

According to the book of Hebrews, all God cares about is that we keep our faith in Him until the end. He will use trials and sufferings in our life to refine our faith and cause us to depend upon Him. Only those who endure until the end, will be saved. The ONLY unforgivable sin is unbelief. MANY have suffered horribly for their faith.

Others had trial of cruel mockings and scourgings, yea, moreover of bonds and imprisonment: They were stoned, they were sawn asunder, were tempted, were slain with the sword: they wandered about in sheepskins and goatskins; being destitute, afflicted, tormented; Of whom the world was not worthy: they wandered in deserts, and in mountains, and in dens and caves of the earth. {Hebrews 11}

Yes, life down here is hard and some of you are married to very disobedient husbands. If these people could endure being stoned and tormented for their faith, surely you can endure a disobedient husband with the help of godly people in your life. Your husband may be just the thing that God will use in your life to refine your faith and make you more like Jesus. This is NOT our home. We have an everlasting home that will be perfect. Cling to this hope, which will be a reality one day soon.

But without faith it is impossible to please Him:
for he that comes to God must believe that
He is and that He is a rewarder of them that diligently seek Him.
Hebrews 11:6

***Next Monday, September 7th, I'm going to be starting a 10-week series using Nancy Leigh DeMoss' study guide called "Interior Design: Ten Elements of Biblical Womanhood." You can order it HERE if you would like to follow along. Some of the chapters include: Discernment, Affection, Discipline, Virtue, Disposition, and Beauty. It will be an encouraging and convicting study. Please join us!

The picture is my son, Steven, with his bride, Emily. They continue to love each other

deeply. They plan on being in the "honeymoon" phase of marriage all of their days!