A Godly Woman Has a Deep Affection for Her Family 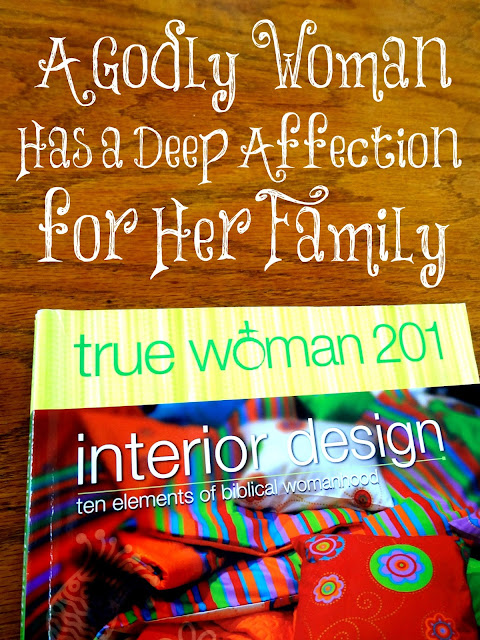 All I ever wanted while I was growing up was to be a wife and mother. I was raised after the 60s when the feminist's movement was in full swing and college with a career was what we were supposed to pursue. I didn't want that at all but I did go to college, taught a few years and then was able to be home full-time raising children and keeping my home. I knew I was right where I was supposed to be. My mom was always a full-time mom and homemaker.

The Bible doesn't say that older women are to teach the young women to go to college and have careers. Did you ever think it was because God has different plans for women than what society does? It never tells us to have a career just "in case." This is not God's plan for women. You can find no command in the Bible that tells women to pursue this path.

I love the teachings of Nancy Leigh DeMoss. She has always been a single women, although she is getting married soon. Being single wasn't her plan, but the Lords and sometimes His plan is this for women but for, by far, the majority. He wants them to have a DEEP affection for the home and family, including having children. Having children, you see, isn't about you and it isn't about them. It's about Him, our heavenly Father. We have children because we are made in His image, in the likeness of Him, who told us to be fruitful and multiply. We create because we are like our Creator. Among other good things, it is what we are normally called to do in this world, barring a special calling from God.*

While reading this chapter, I felt like I didn't even need to read it since I LOVE teaching this topic and have for many years! It's so wonderful to hear it from others. I realize some women will never marry or have children but it doesn't mean you don't have an affection for home and family. There are many ways, if you are single or barren,  that you can still minister to in your own home and to other young women who need help.

Though Macmillan and other  dictionaries may come up with new, different definitions, it is not up to dictionaries; nor is it up to us to define what man, woman, husband, wife, and marriage mean. God created these things. He dictates what they mean.*

The aged women likewise, that they be in behaviour as becometh holiness, not false accusers, not given to much wine, teachers of good things; That they may teach the young women to be sober, to love their husbands, to love their children, To be discreet, chaste, keepers at home, good, obedient to their own husbands, that the word of God be not blasphemed.
Titus 2:3-5

HERE  is the video for this session.

*True Woman 201: Interior Design—Ten Elements of Biblical Womanhood, ©2015 by Mary A. Kassian and Nancy Leigh DeMoss. Used with permission of Moody Publishers. You can buy the book HERE.