What Destroyed Sodom and Gomorrah? 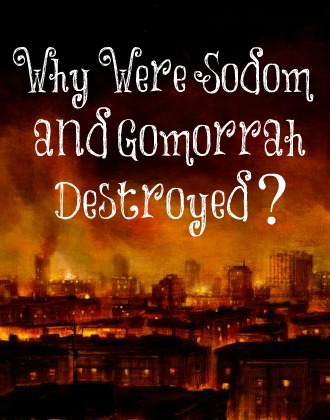 Many believe it was homosexuality that destroyed Sodom and Gomorrah. Before they lay down, the men of the city, the men of Sodom, surrounded the house, both young and old, all the people from every quarter; and they called to Lot and said to him, "Where are the men who came to you tonight? Bring them out to us that we may have relations with them" {Genesis 19:4, 5}. Then others believe it was pride that destroyed them, NOT homosexuality. What does God's Word have to say?

Behold, this was the iniquity of thy sister Sodom; pride, fulness of bread, and abundance of idleness was in her and in her daughters, neither did she strengthen the hand of the poor and needy. And they were haughty, and committed abomination before me: therefore I took them away as I saw good {Ezekiel 16:49, 50}. God's Word tells us that it was pride that led to homosexuality.

Romans 1 clearly explains the progression of sin. For even though they knew God, they did not honor Him as God or give thanks, but they became futile in their speculations, and their foolish heart was darkened. Professing themselves to be wise {PRIDE}, they became fools...Therefore God gave them over in the lusts of their hearts to impurity, so that their bodies would be dishonored among them...For this reason God gave them over to degrading passions; for their women exchanged the natural function for that which is unnatural, And likewise also the men, leaving the natural use of the woman, burned in their lust one toward another; men with men working that which is unseemly, and receiving in themselves that recompence of their error which was meet. And even as they did not like to retain God in their knowledge, God gave them over to a reprobate mind, to do those things which are not convenient.

Then again in James 1:14, 15 But every man is tempted, when he is drawn away of his own lust, and enticed. Then when lust hath conceived, it bringeth forth sin: and sin, when it is finished, bringeth forth death. As you can see, there is NO "falling into sin." Sin is a progression of small steps moving farther and farther away from God's ways and giving into our flesh instead of obeying God.

Therefore, it does begin with pride; thinking we are wise and know better than God. God warns about riches since when all of our needs are abundantly met, we no longer rely upon the Lord to meet them and we don't thank Him for all that we have but instead think it is only from our hard work. After we heap up stuff, we become idle with too much time on our hands and begin to get in trouble by slowly compromising with the world and its ways. We forget about the poor and needy and hoard everything to ourselves. Lastly, we give in to every type of abomination and participate in wickedness, becoming seekers of pleasure rather than seekers of God.

How do we prevent this from happening to us when we see our nation falling into the same sins as Sodom and Gomorrah? We dwell on the lovely and the good. We let the Word of God dwell in us richly being transformed by the renewing of our mind with God's Truth and NOT the lies of the world. We walk with the wise. We are thankful and generous; sharing our money, time and talents with the needy. This is a life that is pleasing to the Lord and His grace upon us makes it possible to walk in the Spirit becoming servants to righteousness instead of walking in the flesh and servants to sin.