Public School Teacher Says, "Get Your Children Out!" 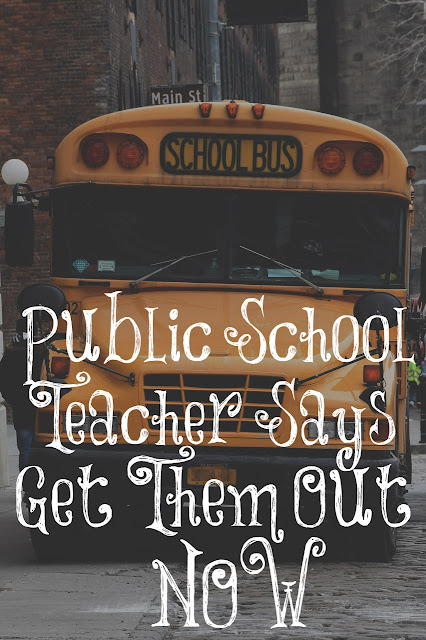 As I step out of my car and begin my long walk across the parking lot I can already feel the oppression in the air. With each step I take the darkness increases and I know deep in my soul that I am now behind enemy lines. Walking through the gates of the public high-school where I teach feels as if I were walking into a concentration camp dedicated to the spiritual death of those imprisoned behind these walls. As a missionary masquerading as one of the “guards” I am an eyewitness to the daily indoctrination and spiritual torture that is inflicted upon those who have been sentenced to come here by their own well meaning parents. The defiling effects of the government curriculum, the media, and the student culture can be seen everywhere you look, but especially in the faces of every student that I teach.

When I look around the room as I’m teaching one of my classes, I am all too aware that 15 out of 30 of these dear children are sexually active. You see, sexual immorality with several partners throughout high school is the norm. Our sex-crazed American culture has defiled the minds and bodies of our sons and daughters. So much so that 23 out of 30 believe that homosexuality is acceptable. 12 out of 30 have used marijuana. 14 don’t see a great risk in heavy daily drinking. 18 have cheated on a test during the last year, 9 stole from a store, 24 have lied to their parents about something significant, and even though they have done these things 28 out of 30 are satisfied with their personal ethics and character. My heart breaks over the moral decline of our youth, but we have an even bigger problem.

Between 70-88% of children from Christian homes walk away from the visible church by the end of their freshman year in college. Less than 1% of all Americans between the ages of 18 and 23 have a Biblical worldview including those that came from Christian families. The fastest growing religious group in America is made up of atheists and agnostics including many of our own children. God is being mocked as the minds and hearts of our children are being stolen by the world leading millions of them to spiritual destruction. The question is why is this happening? There are many contributing factors to this crisis, but there is one factor that almost 9 out of 10 Christian families have in common. 89% of Christian parents send their children to the public schools.

The idea that public school curriculum is religiously neutral is a lie. Evolution based science classes discredit the reliability of the Bible and get rid of God as Creator. History classes get rid of God as Sovereign King and demonize Christianity. English classes reinforce this message through the literature they assign their students to read. This deliberate indoctrination encourages students to break each and every one of the Ten Commandments and sabotages the message of the gospel. By getting rid of God, they get rid of His absolute moral law. Without God and an absolute moral law, the idea of sin and God’s judgment becomes a figment of someone’s imagination leaving students to sin to their hearts’ content. Without the reality of sin and hell, Jesus suffering God’s wrath on the cross in our place becomes an unnecessary myth, and the call to repent of our sins and trust in Jesus as our Lord and Savior becomes foolishness to the minds and hearts of public school indoctrinated youth. This has led millions of our own children down the broad road to spiritual destruction.

You might think that you are doing enough in the personal discipleship of your children to counteract this ungodly teaching or that by taking your children to a strong Bible believing church your children will be able to survive the public schools, but that is not what the statistics say or what I have personally witnessed during my 13 years of experience as a public school teacher. On the contrary, what I have seen is the destruction of countless children from Christian families, including many who went to doctrinally sound churches.

One such family that I knew from church was the Walsh family. The Walsh family home-schooled their children for many years but when two of their daughters reached high-school age, they decided to send them to the public school where I teach. As soon as I found out about their decision, I warned them about the spiritual dangers of public education, but sadly they ignored my warning. It was as if their daughters were placed inside a spiritual gas chamber. It didn’t take long for the poison to take effect. Within a year’s time one of them even became a lesbian. My heart broke each and every time I saw her walk around campus with her girlfriend. I can only imagine how utterly devastated her family must feel.

Stories such as this one have become all too common, but not all corruption is out in plain sight. I have seen many of our children pretend that they are who their parents want them to be, only to change their outfits, their personalities, and their moral values as soon as they get to school. The public schools steal the hearts and souls of our children long before they walk away from the visible church; many as early as elementary school, 40% by end of middle school, and 80% by the end of their senior year of high school. As a result, our families are crumbling, our churches are weakening, and our nation is on the road to becoming the next Sodom and Gomorrah.

At the end of every day, as I walk through the halls and glance into the empty classrooms, the whispers of lawlessness haunt each corner and desk while the stench of spiritual death lingers. I think back to everything that I witnessed throughout the day and I wonder how Christian parents could possibly think that this godless institution is the type of “education” that God intended for their children. If they only knew what was happening to their children “behind enemy lines” and what God actually says regarding education, they would not hesitate to rescue their children from the public schools and provide for them a Biblical education for the glory of God.

To learn more about what God says regarding education and a firsthand public school teacher’s account about what is really happening “behind enemy lines” please go to www.EducationReformation.org to read my book Education Reformation for free.

***You don't think the following verse is a warning to parents about
sending their children to public schools?

Now I beseech you, brethren, mark them which cause divisions and offenses contrary to the doctrine which ye have learned; and AVOID them...by good words and fair speeches {they} deceive the hearts of the simple.
Romans 16:17,18