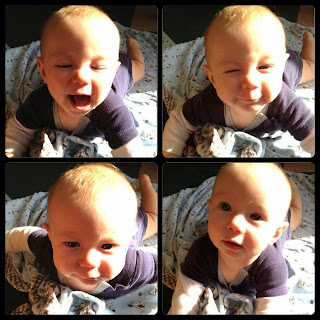 I was talking to a friend recently.  Her grandbaby was diagnosed with autism.  Her doctor told her to never let the baby stare at a computer screen or television.  It is not good for the development of the brain.

Mmmm, I thought.  I know Ryan and Erin don't let baby Kenny watch television and now I know why.  We just weren't created to stare at one place for a long, long time, especially a developing little brain.  I have heard that you should set your baby wherever you are so they can just watch you work.

Baby Kenny loves watching his big sister, Emma.  She keeps him very entertained because she never stops moving.  He just follows her with his eyes and head wherever she goes.  When I was holding him on my lap, he would look at whoever was talking and watch them.  This is good for babies.  This is how it ought to be.

A friend of mine who works with autistic children said that children need a lot of movement.  As soon as they start to crawl, let them crawl all over.  This is the best thing for ensuring a smart child.  She encourages couples not to put their babies in jumpy or walking things.  When they get older, make sure they are outside playing a lot.  They should spend very little time watching television or playing computer games and none when they are babies.

More and more children are being diagnosed with autism.  I'm not sure what is happening;  too many vaccinations, too many chemicals in the environment overloading a poor baby's immune system, I don't know but it is becoming way too common.

So, dear mothers, be good role models for your children.  Don't spend too much time on the computer, iPhone, or watching television, especially when they are young.  Take them on walks, play games with them, read to them, and put puzzles together.  It will help insure your child the best possibility of doing well in school.

Behold, I send you forth as sheep in the midst of wolves:
be ye therefore wise as serpents, and harmless as doves.
Matthew 10:16