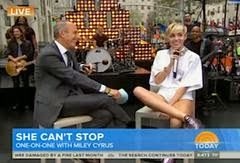 Matt Lauer interviewed Miley Cyrus yesterday and asked her about her parents.  Does she still listen to them?  Do they support her?  She responded by saying that they love her unconditionally.  She said unconditional love means you love them regardless of their behavior.

I have no idea what her parents really think of her behavior but to most of us, we see it as rebellion.  It is most certainly rebellion to God's ways but since she probably isn't a believer, she doesn't live by the standards set by God.

Many of you have prodigal children.  Many are living in open rebellion to God and His ways.  How do you treat them?  How do you support them?

I believe Miley's parents are doing the right thing by loving her unconditionally.  If my child was acting like her, they would know full well that we were completely opposed to her rebellion but we would love them anyways.  {If she had been raised in our home, in the Word, we would not even have to tell her because she would know.}

Once in awhile when Ken was putting the children to bed, he would whisper in their ear, "You know there is nothing you could do that would keep me from loving you.  I may kick you out of the house but I will always love you."  Our heavenly Father whispers the same thing to us except the kicking us out of the house part, but He does discipline us.

Being angry and upset with rebellious children doesn't help anything.  Actually, it just makes it worse. They feel condemned by their parents, the walls go up, and the relationship is destroyed.  God calls us to love even our enemies.

Think of the story of the prodigal son in the Bible.  The father mourned the loss of his son but as soon as he saw his son, he ran to him with open arms regardless whether he repented or not.  Even before he knew he was going to repent, he loved him any ways.

We are called to love.  Love changes people.  The last thing you want to do is destroy your relationship with your wayward children.  Whenever you see them, love them deeply.  Be warm, listen carefully, feed them a good meal, and tell them how much you love them.  Let them see Jesus living through you, then pray like crazy.

And he arose, and came to his father.
But when he was yet a great way off,
his father saw him, and had compassion,
and ran, and fell on his neck, and kissed him.
Luke 15:20