The Nightmare of Over Commitment 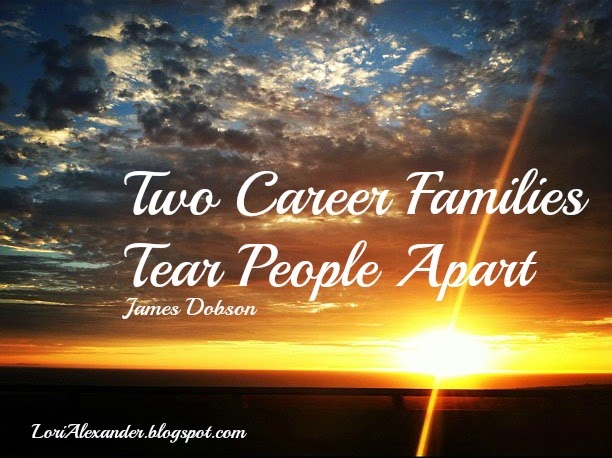 I have never written this before, and I will be criticized for saying so now, but I believe the two-career family during the child-rearing years creates a level of stress that is tearing people apart.  And it often deprives children of something that they will search for the rest of their lives.

For many years, he said that the early years in a child's life are the most important for a mother to be home. Then, he decided that elementary years were just as important. Finally, he changed his mind that high school years were the most important. Now, he has come to the realization that children need a mother in the home during ALL the years that they are under their parent's roof. They need to be taken care of , protected, given boundaries, and trained.

Dr. Dobson goes on to say ~

My prayer is that a scale-back from a lifestyle of constant time-pressures will someday occur. If it ever becomes a movement, it will portend wonderfully for the family. It should result in fewer divorces and more domestic harmony. Children will regain the status they deserve and their welfare will be enhanced on a thousand fronts. We haven't begun to approach these goals yet, but we can only hope that a significant segment of the population will awaken someday from the nightmare of over commitment and say, "This is a crazy way to live. There has to be a better way than this to raise our kids. We will make the financial sacrifices necessary to slow the pace of living."

It is not enough simply to be at home and available to our children, however. We must use the opportunities of these few short years to teach them our values and beliefs. Millions of young people who have grown up in the relative opulence of North America have not had that training. They are terribly confused about transcendent values. We have given them more material blessings than any generation in history. They have had opportunities never dreamed of by their ancestors. Most have never heard the pounding of artillery shells or the explosion of grenades. More money has been spent on their education, medical care, entertainment, and travel than any who have gone before. Yew we have failed them in the most important of all parental responsibilities: We have not taught them who they are as children of God or what they have been placed here to do.

Most pastors and teachers are afraid to say these kind of things these days because so many women will get offended. Many women would probably leave a church that taught this! We should never be afraid of teaching God's truths. We must continue to shine the light of Truth in this dark world. Children need a mother at home. They do. They really do.

She looks well to the ways of her household
and does not eat the bread of idleness.
Proverbs 31:27