Do Men Marry Just for Sex? 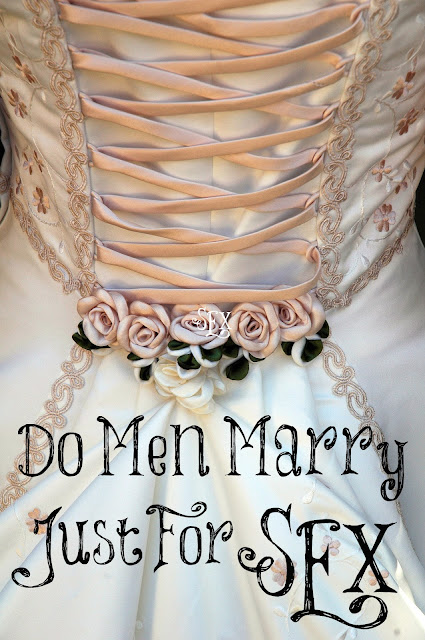 A man posted a comment on a blog explaining that men marry just for sex. I asked Ken what he thought and he said, "No way!  There are many reasons why men marry and sex is just one important reason."  Then Ken decided to write the following post  ~

Saying that "men marry just for sex"
is analogous to saying "men buy homes just to sleep in them."

Sure, one of the most important reasons why we buy a home is so we can have a roof over our head and a comfortable place to sleep. But to own a home, and to live within it, has far more meaning to a man than just a good night's sleep.

Don't misunderstand that a significant part of marriage for man is his privilege, joy, pleasure and right to sleep with his woman. To a man, sex is a glorious thing which conjures up strong emotional attachments. Many a man has given his life for his bride, or would give his life in an instant, because of the hormonal bonds that are created during those blissful moments where he felt that he and his bride were truly one.

Few men would desire to enter into a marriage contract with a woman who is unwilling to fulfill her marital role, and beyond that, unwilling to pleasure herself with him in bed where he believes true intimacy is formed. The thought of intimacy without sex is generally foreign to a man, and yet many women want intimacy before sex, after sex, and any time but sex. Herein lies one of the great challenges of marriage, that many men are reaching for intimacy in the times that they playfully make love to their wives, and yet many women want to know their man loves them, without sex.

When it comes to sex, God's ways are very clear that with husband or wife, your body is not your own, but belongs completely to your spouse when it comes to the marriage bed. We are to please each other, and by pleasing each other it does not mean withholding sex, but rather entering into God's design where husband and wife put aside all of their cares and focus on being with, and uniting with, their spouse on a regular basis.

Imagine buying a house, but having to sleep elsewhere each night. or never being able to take a nap when tired.  What an awful place to live! Just as men long to get regular sleep and be fully rested, they also want to have their sexual needs met on a regular basis, and in a fulfilling way. Sleep and sex, two most basic male needs, should be regularly fulfilled.

So.... Would men marry women if there was never any pleasure in sex?

Why? Because there is so much more to being a man than meeting our sexual needs and desires.

Have you noticed that almost all worldly creations and inventions have been made by or discovered by a man. This is not by accident, or because women are somehow inferior to men, or not given the opportunities that men have been given, but because men have in their DNA, and in their hormones, the need to create, to discover, to conquer, and to achieve great success. We are far from content when it comes to finding our purpose in life.

Most men are on a quest to leave something of themselves behind. For me, my greatest legacy will not be in the significant success I have had as a consultant, or in helping others achieve their goals in life, but rather in the time, energy and effort that I have invested in my family to raise up four godly kids who in their own right are highly successful in meeting God's purpose for their lives.

This purpose that burns within me stands head and shoulders above any pleasures that I may seek in life. I've spent countless overtime hours each week, traveled the globe, mastered foreign languages, and thrown up all night just to rise and give eight hour lectures, all because I have a purpose in life that I am driven to fulfill.

Not every man lives with purpose in mind, but most godly men do. We know that the day will come when we stand before our Creator and our ultimate purpose will be achieved when we hear Him say,

"Well done good and faithful servant, enter into the joy of your Master."

Compared to this purpose all else pales. I believe this purpose is built into all men, at least until it is drowned out by worldly worries and pleasures. Men don't jump in front of moving cars, or in front of a knife blade, or go to war for their wife and family because they want sex. No, men enter marriage and seek after relationships for far nobler causes and none the least of these is to leave a legacy behind. A legacy of love, honor, duty, commitment, hard work, and most of all commitment to someone outside of ourselves who we can honor and cherish for a lifetime.

If many men have lost their way and have reduced marriage down to a simple contract for lifelong sex, then such men are badly mistaken as to their calling and purpose. For life must be much more than a bundle of connected neurons stimulated by hormonal and electrical impulses. No, the human animal is free to make choices and it is by these choices that we are ultimately defined as to who we are in life, and who we will become.

The World says choose pleasure, pride, worldly success, self-centeredness, for you only have one life to live, so be a taker, not a giver, and see how much you can get by giving as little as possible in return. All lies that in no way conform to the image of the Son of God.

For this man, intimacy and pleasure with my wife is very important, but it pales in comparison to what God has called me to; a lifelong of serving my wife and my family. God says choose Me, and by doing so I will give you all that my Son has to offer in this life and the next.

This is my commandment,
that you love one another
as I have loved you.
Greater love has no one than this,
that someone lay down his life for his friends.
You are my friends if you do what I command you.
John 15:12-14