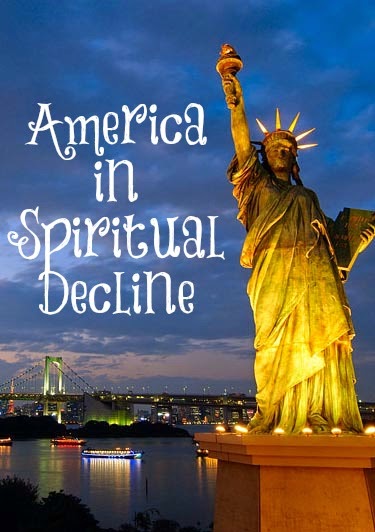 According to a provocative Pew Research, Christianity is on the decline. 70.6% of people say they are Christians, down 8% from just seven years ago. Those opposing any religion is up 50% from 16.1% to 22.8% from 2007. There’s no question that people of faith are being marginalized by a secular media and pernicious entertainment. The rap industry often glorifies depraved behavior and that sinks into the minds of some young people. Many movies and TV shows promote non-traditional values. If you are a person of faith, then the media generally thinks you’re a loon. The prevailing wisdom especially among youths is whatever is good for me is good, period; the overall good be damned. There is a strong move to legalize drugs and decriminalize even the sale of poisons like heroin and cocaine. Any student of history knows that when a nation turns towards the pursuit of individual gratification, the country is in trouble. Romans ultimately rejected sacrificing for the republic, and the empire collapsed…Although the founding fathers wanted freedom of religion, they did not want a secular nation. That is clear in the writings of Thomas Jefferson and James Madison. The founders believed that a strong moral code protects people from harm and avarice….There is no question that America is changing for the worse.

These sobering words were said by Bill O'Reilly, host of a Fox News show. Now, as Christians, we know that that those who are true Bible believing, Spirit-filled Christians are always going to be a remnant. If almost 71% of those who claimed to be Christian were truly walking in the Spirit, this nation would look much different than it does today.

However, our nation was founded upon biblical principles, thus most people knew right from wrong and they had a strong sense of godly morality. This is what is being lost. What is right is wrong and what is wrong is right in today's culture. Mr. O'Reilly is right on when he stated that "the prevailing wisdom especially among the youths is whatever is good for me is good, period."

Unfortunately, when we seek only our good, nothing good comes out of it. This can be seen in women leaving their homes to pursue the "good" they believe is "out there" somewhere. When everyone is seeking their own good, societies crumble and children get the brunt of the storm.

Our answer isn't in politics, as Mr. O'Reilly points out. No President can get us out of the mammoth hole we have dug for ourselves. However, our goal shouldn't be a "Christian nation." Our goal should be to live lives that glorify our Savior and give hope to the many around us living in darkness. As society grows darker, our light will shine brighter for greater is He who is in us than He who is in the world! How can we shine brighter? Mothers need to be home raising their children to know and love the Lord. Wives need to love their husband and be vow keepers. This world desperately needs to see Christians living godly lives and drawing others to Jesus, always remembering that we can do ALL things through Christ who gives us strength. This country doesn't need a great President {although that sure would be GREAT!}. This country needs Jesus and His children to live godly lives through Him and be lights to this once great nation in rapid spiritual decline.

If my people, which are called by my name, shall humble themselves, and pray, and seek my face, and turn from their wicked ways; then will I hear from heaven, and will forgive their sin, and will heal their land.
2 Chronicles 7:14