Were the Women of Old Submissive? 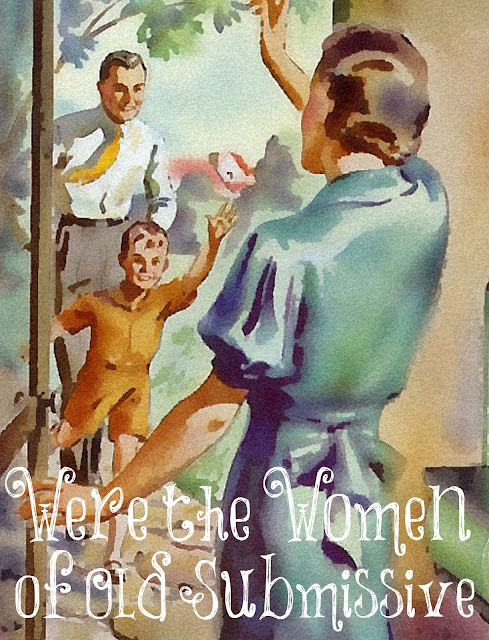 The picture in our minds that we get about life during the Leave It to Beaver and Father Knows Best days is that all women must have been gentle, kind, modest, submissive to their husbands and love being keepers at home but was this really the case? No, women have always struggled with being cheerfully submissive and content being at home or else the Bible wouldn't have older women teaching younger women these things. Yes, there are some personalities that are more the pleasing types who don't fight and argue to get their way, but they are far and few between. All of this disobedience happened once sin entered the world and it is what we are fighting against. We may think it is only feminism but it is not.

Satan entered the world and became the prince of the power of the air when Eve wrested control from Adam and dashed all of civilization into chaos. Even most of the "great" women of old that we read about in the Old Testament weren't examples of godly womanhood at times. Sarah wanted her husband to sleep with another woman in order to get a baby, thus going against God's promise to her and Abraham's will.

There weren't as many divorces before feminism took hold but I bet the majority of homes were still run by the women. It's just the way we're built. Most women want to be in control, have their own way, and make their husbands do what they want them to do through manipulation, refusal of sex, and many other creative ways. Yes, feminism has made it much worse for marriages and the children since mothers have left their homes and women don't rely on their husbands for provision anymore. This is absolutely a tragedy but most women throughout the centuries have struggled with control and lack of submission.

It is said that the Church is ten years behind culture and I believe it. The Church used to teach women about submission, having a meek and quiet spirit, and being keepers at home. Few churches teach this anymore so Christian women often look no better than their feminist neighbor in how they treat their husbands, what they wear, act, and what entertains them.

We need to stop going by our culture and our own selfish desire to control, and begin obeying the Word of God. No Christian woman should be following in the steps of feminism or rebellion. Begin studying the Word of God and become the submissive and obedient wife that the Lord calls you to become. Live within your husband's income even if this means living in a small home, not having Internet, and not eating out or going on vacations. Pursue what the Lord wants you to pursue, not this depraved culture. 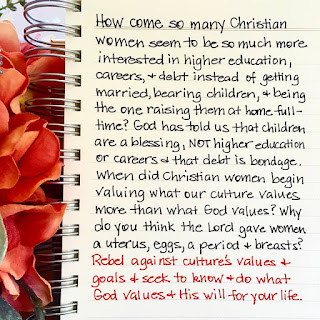 If ye then be risen with Christ, seek those things which are above,
where Christ sits on the right hand of God.
Colossians 3:1